Andrew Whipple of St. Maries knows all too well the cost of war for our veterans.

Andrew graduated from the University of Idaho in 1991 with a teaching degree and an ROTC commission. He took a job at an educational school and joined the Idaho Army National Guard.

In March 2004, his guard unit was activated and then sent to Iraq in November. Andrew served as a company commander for a combat engineer company. They flew to Kuwait, then by convoy of trucks to Kirkuk, Iraq.

He remembers the stench of burnt garbage, burnt rubber, sewage in the streets, and burnt household garbage. The city reminded him of a third world country with donkey-drawn carts and massive traffic jams.

His travels outside the guard doors revealed the human remains of car bombs and rocket attacks. The most alarming images were of mutilated children.

Andrew’s job as a teacher did not prepare him for the horrors he witnessed. He wondered how a company could treat its people like this. Mortar and rocket attacks were common several times a week and he was shot down several times. He knew soldiers who were killed in IED attacks.

In November 2005, he returned to Idaho and returned to teaching. He retired from the Idaho National Guard with the rank of major in 2011.

Andrew’s first indication of post-traumatic stress disorder (PTSD) came in 2015, when his personality began to change. He got angry with the students and had a night sweats. His blood pressure was high and he began to remember his time in Iraq.

Deeply moderate thoughts of war returned and he descended, even though he was never personally engaged in combat. He felt that a former army officer should be able to handle this situation.

Andrew went to the VA in Coeur d’Alene, where they prescribed antidepressants and anxiolytics. He was convinced he could meet the challenge without further help.

In 2017, she was prescribed a new drug. The next day he put on his army uniform. He came out with a shotgun and sat in the back yard. He had started drinking more in recent weeks and he was angry with the world.

A friend passed by and visited him, and the incident ended without serious consequences. At the age of 51, Andrew decided to retire from the Kootenai School District in Harrison.

In December 2019, Andrew was frightened by the flashing lights of a police car. He rushed home and told his wife he imagined someone was chasing him.

In February 2020, he enrolled at the American Lake VA Hospital PTSD Clinic. He spent five weeks in the clinic and credits the VA for saving his life. He had collapsed so low that he did not consider himself worthy or of any value. The VA helped him with his resentment and anger and lifted him from the depths of despair.

Andrew had never connected the horrible things he had seen in Iraq with his real feelings. The VA brought it all to the surface and got to talk about it.

Andrew joined a writing group at the American Lake VA Medical Center and wrote short stories and poems. In February 2021, a National Guard helicopter with three pilots crashed in the mountains outside of Boise and Andrew wrote the poem “Above the Purple Sage”.

He then wrote a book of poems called “From Inez to Andrew” and it is sold on Amazon. The book contains poems written by his grandmother Inez during World War II and includes recent poems by Andrew. Andrew never knew his grandmother, but their poems reflect a similar style and content.

Maybe telling her story is also therapeutic. He now says he has inner peace and believes he has reinvented himself. The dark times are gone. Andrew has an 80% VA disability rating and receives a monthly VA disability check.

He has shown the way for all who find themselves overwhelmed by troubling and deep thoughts. The VA has the tools and the counselors to guide a person from a dark and deep place. Andrew says he almost waited too long for help. He also says he couldn’t do it alone.

Darrel Maddux is a member of the Public Relations Committee of the Department of the American Legion. 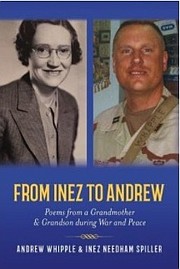